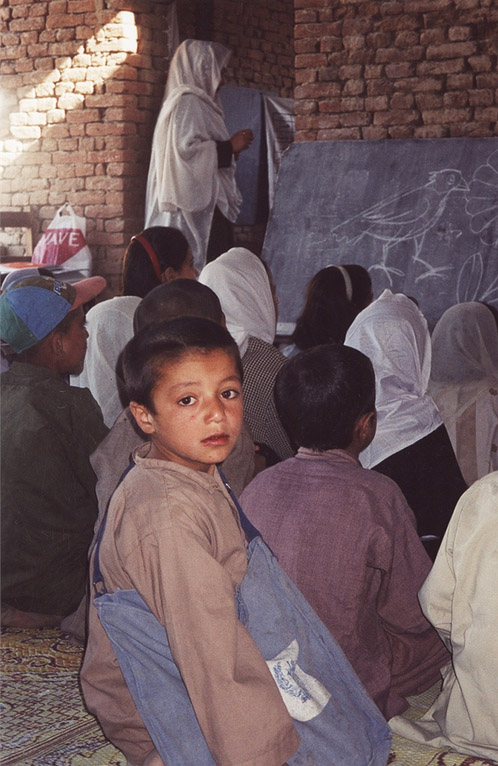 Just like Ryszard Kapuściński, Polish reporter and writer, we believe that here we live in a paradise that 80% of the global population has no access to. Peace, security, clean water, food, access to education – millions of people in Afghanistan, Yemen, Somalia, and lots of other places all over the globe can only dream of all we have here and take for granted.

We set up Schools for Peace in March 2002. A year later came a truly special moment when the former Polish Prime Minister Tadeusz Mazowiecki joined us as an honorary member (click here to see the letter).

All of us are volunteers. We have never ever had an office. None of us has ever been paid for the work for Schools for Peace. Everything we receive goes to the people in need.

Very humble and perhaps laughable beginnings in 2002 – when one of us took several boxes of English textbooks and simply flew to Kabul. The English Department of Kabul University had practically nothing (click here to see our books). Ten years later we were one of the key donors for the Polish military contingents in Afghanistan. We delivered tonnes of English books, second-hand computers, winter clothes, blankets, detergents (click here to see thank-you letters from Afghanistan and also from Bosnia, Kosovo, Lebanon).

Yemen remains the biggest humanitarian crisis in the world. We have been distributing life-saving food baskets there. Each basket (25 kg of flour, 5 kg of sugar & rice, 2kg of red lentils, 2 l of cooking oil) keeps a family of 8 alive for a month. The scale of famine in Yemen is beyond belief.

Just like Professor Mohammad Yunus, Nobel Peace Prize Laureat (2006), we believe that if each of us helped five other people poverty would become a museum piece. Some may laugh, some may turn their eyes away. Professor Yunus explains: very often when we don’t see something we simply do not want to see it. It is not how we see things. We do see Afghan refugees in Poland and help them. We do see people who are homeless in Warsaw and try to help them. We do see Ukrainians now seeking refuge in Poland. Some of us volunteered as translators at the Central Railway Station in Warsaw in the early days of Putin’s invasion.

Surprisingly often it is possibile to obtain goods for free. This is how we received tonnes of brand new English textbooks or blankets. Sometimes it helps when you do not take a ‘no’ for an answer.

This philosophy does not apply – in our case – when it comes to reporting and accoutability. Even from the war-torn Yemen we require detailed reporting and receipts (proofs of purchase) as well as photo documentation. People who trust us have to see how their money is spent.